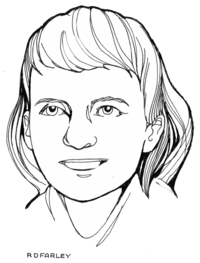 When discussing the greatest ghost writers of all time, M. R. James, Henry James, Algernon Blackwood and H. P. Lovecraft usually get mentioned, with E. F. Benson being proposed with reverence by a learned few. But Rosemary Timperley was arguably better than all of these and certainly more prolific. Unfortunately, she has been mosly forgotton for some unfathomable reason.

She was born in Crouch End, North London on 20 March 1920 to architect George Kenyon Timperley and teacher Emily Mary (née Lethem). She went to Hornsey High School, and King's College London, graduating in 1941. She taught English and History at South-East Essex County Technical School in Dagenham and also worked at Kensington Citizens Advice Bureau during World War II. In the mid-1940s, while still working as a teacher, she started submitting short stories to magazines and newspapers, with the first, "Hot Air – and Penelope", being published in Illustrated 10 August 1946.

Still writing, she left her job as a teacher to become a staff writer for Reveille magazine in 1949, editing the personal advice column (under the pen name Jane Blythe) as well as writing a number of stories, feature articles and book reviews. She married Physics teacher James McInnes Cameron in 1952, and they lived together in Essex. After writing a number of novels, she left Reveille to become a freelance writer, going on to write a number of radio and television scripts and contributing over 50 stories to the London Mystery Magazine. By the early 1960s she had separated from her husband, but continued writing until her death on 9 November 1988.

Rosemary Timperley - The Greatest Horror Writer You Have Never Heard Of