I can find very little about Wallace Nichols. He was born Wallace Bertram Nichols in 1888 in Birmingham. He spoke five languages including Latin, Babylonian and Egyptian. He was an acknowledged acquaintance of many famous people including Churchill, Edward Elgar, T E Lawrence and Dylan Thomas.

Last week, a man called Mulk Raj Anand made a big curry for everybody about. The first course was beans, little ones. I ate two and couldn’t speak. A little man called Wallace B. Nichols, who has made small fortune out of writing epic poems on people like Cromwell and Nelson and Mrs Elsie Guddy, took a whole mouthful and was assisted out. He writes for the Cornhill. After the main dish, which was so unbelievably hot that everyone, except the Indian, was crying like Shirley Temple, a woman, Mrs Henderson, looked down onto her plate and saw, lying at one corner of it, a curious rubbery thing that looked like a red, discarded French letter. In interest, she picked it up and found it was the entire skin from her tongue.

Apart from the 60 stories of Sollius, the slave detective, he wrote several historical novels including Simon Magus and King Perkin's Knight. He moved to a country house near Penzance for health reasons in 1934 and converted an Elizabethan wing of the property into a writing den. It was from here that most of his works were produced and where Sollus was planned and penned.

Bibliography of Sollius the Slave Detective

During the 1950s, he was curator of the Newlyn Gallery near Penzance and one of the founders of the Penlee Park Open Air Theatre.

Although there is a great deal of interest in Wallace Nichols's work, it mostly remains unpublished today. He died in 1967 and his will bequeathed all copyrights and royalties to his literary executor: Margaret Lewis of Heswall, Wirral, who is now presumably dead and the WATCH office hasn't been able to establish the present copyright owner. Neither the executors of the will, nor the University of Essex Library (who hold some of Nichols's papers) have any further information. It is presumed therefore that the few reprints that occurred during the 1990s ("The Bumper Book of Historical Whodunnits") were done following a 'due diligence' attempt at tracing the estate owner. 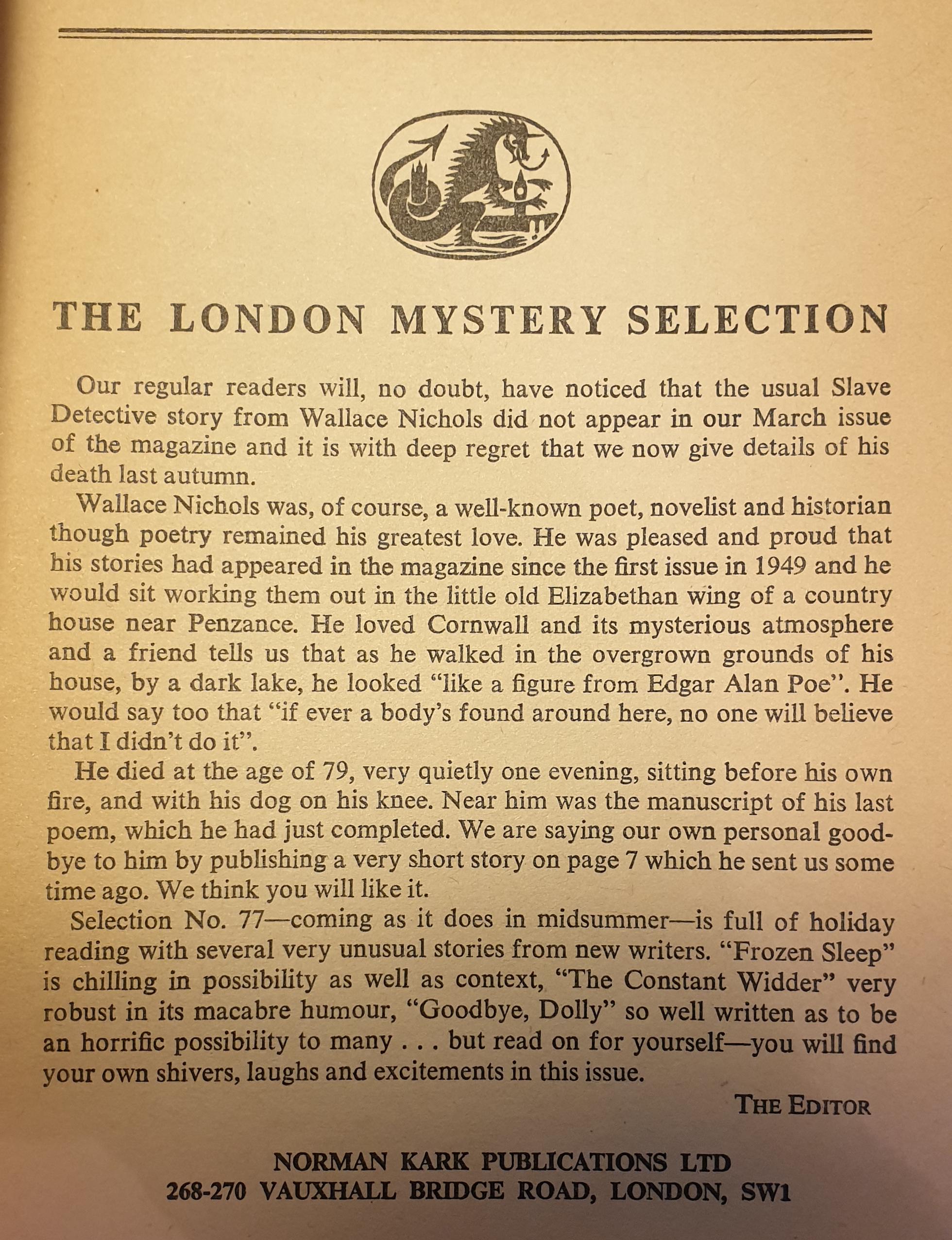