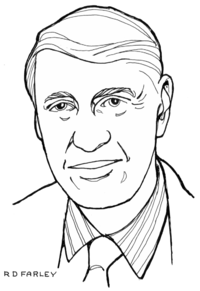 Austen Kark was the son of Norman Kark, The owner of London Mystery Magazine. Austen attended Upper Canada College in Toronto, the Nautical College in Pangbourne, the Royal Naval College, Dartmouth and Magdalen College, Oxford. By 1944, he was a Royal Navy midshipman and served in the East Indies fleet aboard HMS Nelson and HMS London.

In 1948, Kark directed the first production of Jean-Paul Sartre's The Flies. He married Margaret Schmahmann in 1949 and had two daughters.

By 1952, he had joined his father's magazine business, Norman Kark Publications, becoming editor of London Mystery Magazine in 1953.

Austen divorced Margaret in 1954 and married Nina Bawden (the author of Carrie's War) the same year, becoming stepfather to her two sons. They had one daughter. He left the London Mystery Magazine in 1954 to became a BBC reporter where he steadily gained promotion, becoming head of the South European service at Bush House by 1964. Kark moved to the East European and Russian service in 1972 and became Editor of the World Service the following year.

In 1974, Austen became controller of engineering services and in 1981, he became Deputy Managing Director of External Broadcasting.

He was promoted to Managing Director in 1984, 30 years after joining the BBC.

During his retirement Austen Kark concentrated on his writing, he wrote 'Attic In Greece' (1994), and 'The Forwarding Agent' (1999), a spy thriller, set in the Middle East.

Austen Kark died at the age of 75 in the Potters Bar rail crash of 2002, in which his wife, the author Nina Bawden, was severely injured.